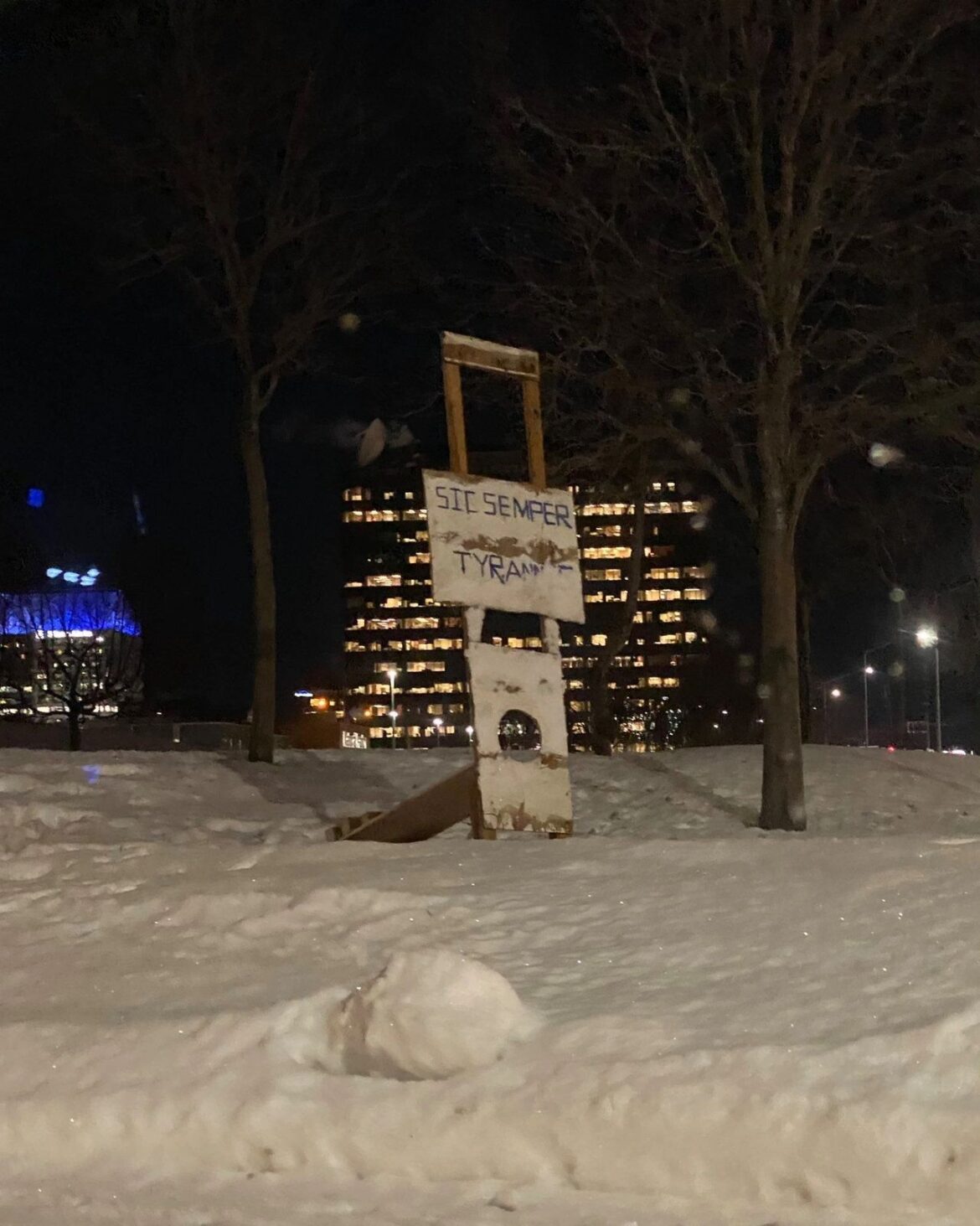 Last December, a photograph of a mock guillotine was photographed by Anchorage resident Anna Hutchinson in downtown Anchorage, who shared it to Twitter shortly after she took it. The guillotine was near 36th and Denali.

The picture left some speculating about why a guillotine would be placed in downtown Anchorage and The Blue Alaskan shared the photograph taken by Ms. Hutchinson to Facebook on December 20, 2020 – because it’s not every day something like this pops up in our city and seemed worth discussing and noting.

Verbiage written on the guillotine reads: “Sic semper tyrannis,” a Latin phrase meaning ‘thus always to tyrants’. The phrase suggests that bad but just outcomes should or eventually will befall tyrants.

John Wilkes Booth wrote in his diary that he shouted “Sic semper tyrannis” after shooting U.S. President Abraham Lincoln on April 14, 1865 and Domestic terrorist Timothy McVeigh was wearing a T-shirt with this phrase and a picture of Lincoln on it when he was arrested on April 19, 1995, the day of the Oklahoma City bombing.

In the months preceding the sighting of the Guillotine, the word “tyrant” was often used by a subset of Anchorage residents who objected to COVID-19 related mandates such as citywide shutdowns, business closures and mask-wearing.

Tyrant was also a word used with some degree of frequency by those who testified before the Anchorage Assembly last year in opposition to the COVID-19 mandates, and the word in various forms can be found in the comment sections of Anchorage Assembly members. The word can also be found in a certain subset of online social media groups which also opposed the COVID-19 mandates.

Some Anchorage residents raised concerns about the use of the word at a time when the country was growing increasingly divided over the pandemic.

One person even claimed that the picture was championed by some people in the Save Anchorage Facebook group.

According to The Appeal in an article written last month, certain Alaska-based groups “compared Berkowitz to Hitler and threatened violence against city officials.”

In January 2021, Alaska News Source reported that “according to court documents, multiple Anchorage Assembly members received threats regarding gun violence last week,” leading to the arrest of an Anchorage resident.

Various screenshots, which some might reasonably find to be concerning, still circulate across social media. It’s not clear what became of the guillotine that had been placed in downtown Anchorage last year and to the best of my knowledge nobody has claimed responsibility for placing it nor conveyed to residents what the exact purpose and intended meaning of the prop and phrase depicted on it was.

Perhaps someone in our city knows the answers to those questions, but for now, the mystery lives on.