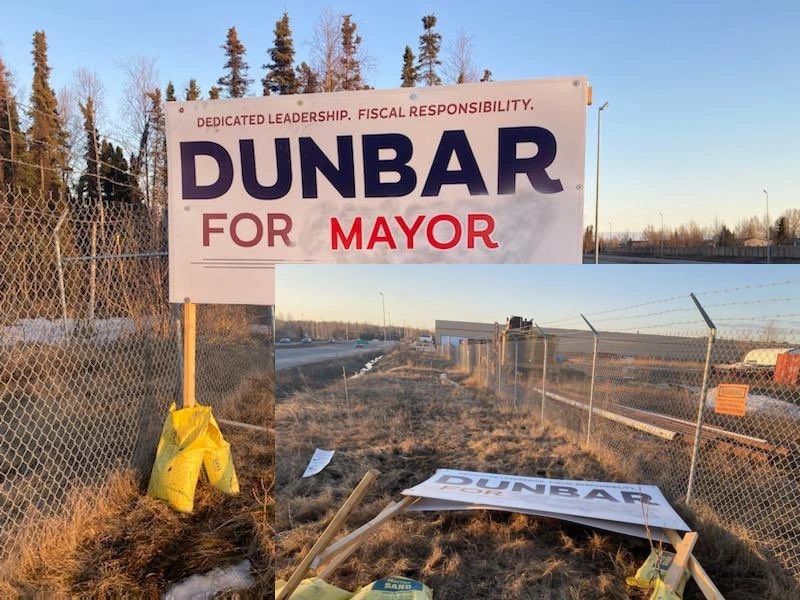 Since announcing his run for Mayor, Anchorage Assemblyman Forrest Dunbar has been subjected to a campaign of hate. In recent weeks, that hate has prominently manifested itself in the form of dozens of vandalized campaign signs across the municipality.

“There was a lull right after April 6, but now we’re back up getting reports basically every day,” says Dunbar campaign manager Claire Shaw, adding that the damage done to campaign signs has cost the campaign “thousands of dollars” so far.

On April 12, 2021, Dunbar wrote on Facebook that cameras set up by the campaign had “captured images of a vandal tearing down and destroying one of our signs + the frame.”

Dunbar also wrote on Facebook that the campaign is actively working with the Anchorage Police Department to identify the alleged vandal.

Thus far, Save Anchorage-backed mayoral candidate Dave Bronson, who often refers to Anchorage’s homeless population as “vagrants,” and who appears to have taken a “tough on crime” stance at a time when violent and property crimes have fallen across the Municipality, has been silent about the vandalism done to Dunbar’s campaign signs until now.

Glenn Biegel of the Alaska Watchman asked Bronson whether he knew who was defacing Dunbar’s campaign signs. Bronson is said to have responded:

“I don’t know who is doing that.  I have asked all my supporters to provide any evidence about who they are, and I will help to prosecute them.”

Vandalism of campaign signs isn’t the only message of hate that has been directed at the Dunbar campaign as a few examples of such hate appear to show.

On January 4 and 7 of this year, mail was received at the Forest Dunbar campaign PO Box that said, “Fuck you. We don’t need another liberal Jew career politician for mayor,” while another came in the form of an endorsement signed by “John Scheister.”

According to the the Municipality of Anchorage Clerk’s Office, 223,000 ballot packages were mailed for the mayoral runoff election. Ballots must be signed, stamped, and returned by May 11.