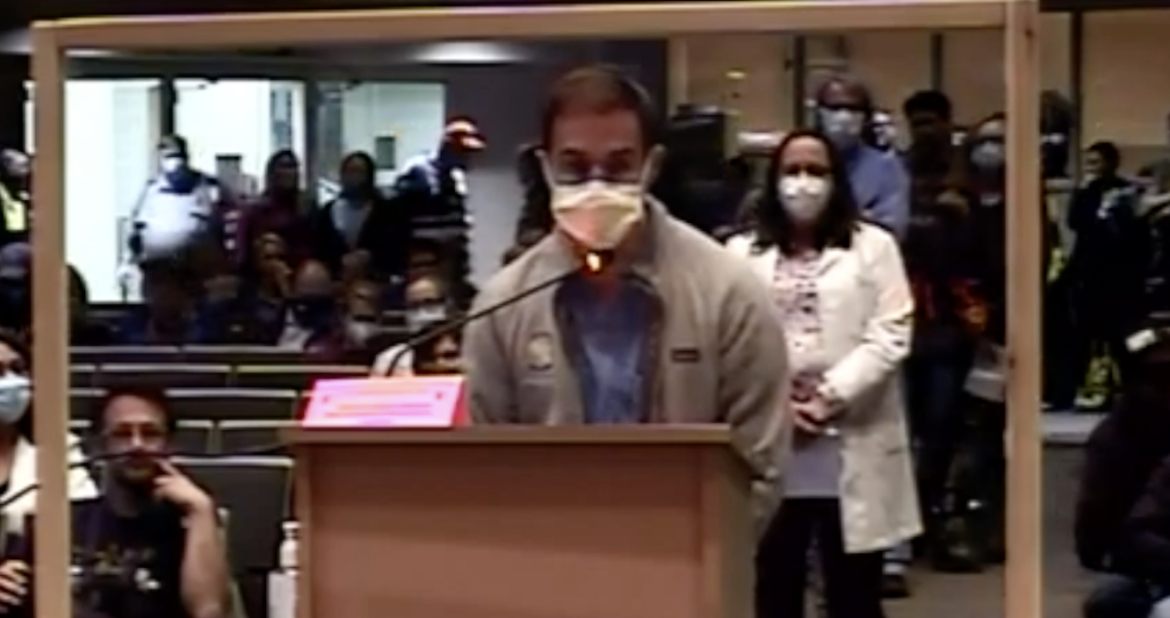 Doctors and healthcare workers stood before the Anchorage Assembly on Tuesday, testifying publicly in solidarity after Providence Alaska Medical Center announced they had implemented crisis standards of care over the weekend. Following Providence’s announcement that they had begun prioritizing the care of patients most likely to recover, healthcare workers shared details of patients waiting for care in the hospital parking lot.

Dr. Ryan Webb was one of the physicians who testified at Tuesday’s Assembly meeting. Dr. Webb, stepping to the podium, first addressed a question presented by Eagle River Assemblymember Jamie Allard. Allard’s question was related to how many hospital beds were staffed versus unstaffed.

While waiting in line to testify, Dr. Webb said that he communicated with the nursing supervisor at Providence and relayed to the assembly that the hospital currently had “223 adult beds at Providence,” noting that one of those beds was currently out of service because of a leak, leaving the hospital with two remaining unstaffed beds. A hush had fallen over the assembly chambers as Dr. Webb continued to explain that the hospital had ten patients waiting in the emergency room for a bed and that three of those patients were waiting for an intensive care unit bed.

“There are no beds available presently,” Dr. Webb testified.

By now, the voice of one of Anchorage’s own healthcare heroes was straining and cracking under emotional weight as he worked to explain what was transpiring behind hospital walls.

“We are terrified as physicians and nurses,” Dr. Webb said matter-of-factly, explaining that healthcare workers were terrified at the prospect of having “two, three or four patients and not having the resources” needed to take care of them.

Dr. Webb’s testimony was a raw and powerful conveyance of what healthcare workers in the business of saving lives are facing: exhaustion, demoralization and the lack of resources to adequately treat their patients.

The next morning, after being moved by his professionalism and powerfully sincere words, I shared his testimony on social media where on TikTok, Dr. Webb’s testimony went viral. By “viral” we’re talking 166,200 views, 26k likes, over 1,400 comments and 1,246 shares — at the time of this writing. Dr. Webb’s testimony, now seen throughout the country, elicited strong reactions from viewers.

The comments made in support of Dr. Webb go on for pages.

But back in Anchorage, some questioned the accuracy of the statements made by Dr. Webb — one of them a sitting assembly member.

On Wednesday, the Facebook account of Jamie Allard shared a post asserting Dr. Webb “didn’t report the facts to the public” when he testified at Tuesday’s assembly meeting. Two screenshots were shared on Allard’s Facebook page in what may have been an attempt to reflect what she thought was a discrepency in Dr. Webb’s public testimony. Allard also alleged in her post that the Anchorage Daily news was continuing to report “inaccurate information.”

What Ms. Allard likely failed to recognize is that not all beds are the “adult beds” Dr. Webb testified about, nor the ones referenced in the Anchorage Daily News article shared by the Eagle River assemblymember.

As word of Assemblymember Allard’s social media post about Dr. Webb began to flood social media, Dr. Lisa Lindquist took note, sharing a screenshot of the post made on Allard’s Facebook page to her own. Dr. Lindquist called on the public to demand an apology from the Eagle River representative.

“I look forward to Assemblywoman Jamie Allard’s public apology to Dr. Ryan Webb for alleging that he didn’t report the facts to the public. As a public representative, it is imperative to fully understand a situation before making allegations. I strongly call on all Eagle River citizens, Anchorage residents, and the members of the Anchorage Assembly to demand a public apology.”

Mike Canfield, a spokesperson for Providence Alaska Medical Center, responded with a statement by email:

“The number of acute-care beds in a hospital does not necessarily correlate to the number of patients who can be treated at any time. This is especially true at large hospitals, which typically have units designated for the care of patients with specific illnesses or injuries. For example, at Providence Alaska Medical Center open beds in the Newborn Intensive Care Unit cannot be used for the treatment of medically ill adult patients. Additionally, other factors affect the number of treatment beds, such as staffing — it is unsafe to put patients in beds without nurses, physicians, and other caregivers available to take care of them.“

Allard’s unseemly post about Dr. Webb is no longer public and is now only visible to her Facebook friends. As for Dr. Webb’s viral video, his words continue to move people across the country, having racked up approximately 2,800 additional views in the time it took to write this post.