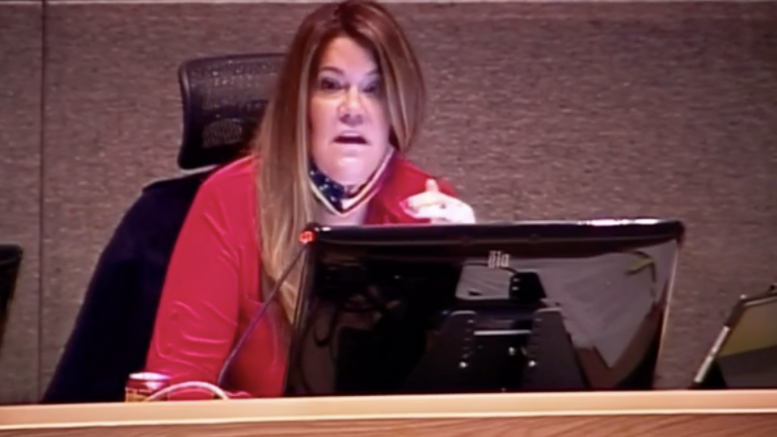 An email sent to Dionne Smith, Audit Manager of CARES Act Audits with the U.S. Department of Treasury by internationally known Eagle River Assemblymember Jamie Allard shows that Allard straight up told the Treasury Department official she believed the Berkowitz Administration was committing “fraud, waste, and abuse” as the administration moved to utilize Covid Relief Funds (CRF) to help Anchorage’s most vulnerable in the midst of the coronavirus pandemic.

On August 10, 2020, Dionne Smith with the U.S. Treasury Department had sent an initial email to Municipal Manager Bill Falsey and all Anchorage Assembly members seeking to coordinate a call with the city to discuss numerous complaints they had received about Anchorage’s proposed use of the Coronavirus Relief Fund payment.

Worth noting is that a group of people had regurgitated throngs of misinformation that had been fed to them and engaged in a mass email campaign — bombarding the Treasury Department with accusations that the MOA and specific Assemblymembers committed fraud. (This is the same group of individuals that sat idly by and watched the Bloviator In Chief blow the United States deficit up by 7.8 trillion dollars.)

Allard’s careless (and lengthy) email was sent to Smith on August 12 of last year when Ethan Berkowitz was still Anchorage’s mayor. The email gives an insightful look at the Eagle River Assemblywoman’s whining about the previous administration’s intentions to utilize Covid Relief Funds (CRF) to help Anchorage’s homeless population by purchasing four buildings.

Allard tells Smith in the email that the “Sullivan Arena and Ben Boeke facilities have been closed so the MOA could buy the (4) buildings,” which does not appear to have been an entirely factual statement.

The city used Ben Boeke as a mass shelter early on in the pandemic but ceased using it for that purpose in early June. Because Covid-19 case counts had been increasing across the Municipality, it was reportedly decided to hold the Boeke in reserve if needed. Thankfully it was not needed, and Boeke was reopened in September, with ice laying having occurred in August.

The Sullivan Arena was indeed closed and was used as a mass shelter for the homeless population, but neither the closure of Boeke or Sullivan had anything to do with the proposed purchase of the four buildings and was instead about public health and safety during a global pandemic.

Allard also told Smith that Anchorage didn’t have “1 positive COVID-19 homeless person” or even “1 homeless in the hospital,” a statement likely to have been false at the time, and also wrote that “none of our homeless issues constitutes using CRF to subsidize the purchase of these buildings.” Allard wrote that there were places for the homeless to go, although she didn’t disclose ‘where’ the homeless were going in her email to Smith.

Allard told Smith that the Municipality was not “honest” about the details surrounding the city’s plan to use the CRF.

Twelve days after Allard’s shortsighted assertion to the US Treasury Official that somehow the homeless had escaped unscathed from the plague ravaging the planet (603,000 so far in the United States), it was reported that the Brother Francis Shelter had a coronavirus outbreak that initially resulted in 20 clients and one employee testing positive for Covid-19 — a number that ballooned to 101 infections in early September with dozens of additional homeless individuals infected in shelters throughout the Municipality (likely indicating homeless individuals were infected and that the virus was spreading among the community at the time Allard wrote her email).

The coronavirus outbreak among Anchorage’s unhoused at that time was of such great concern that the federal government stepped in with support to aid in the suppression of the coronavirus explosion within the homeless population.

I’m unaware of any subsequent email sent by Allard to Smith informing the Treasury Official about the Covid-19 outbreak in Anchorage’s homeless community. Apparently, a truthful representation of facts isn’t important.

Allard also told the US Treasury Department official she believed that Berkowitz’s move to have $21 million “back-fill” the First Responder Payroll Reserve using the CRF was “fraud, waste, and abuse” and griped about a planned $4.5 million for a medical clinic in Girdwood which Allard wrote, “already had issues prior to Covid-19.” ?‍♂️

By the end of Allard’s lengthy email, she told Smith she had about 10 line items she would like to discuss further and that the city was not being “good stewards of the CRF” and that she was “fully aware” she needed “help” for the CRF “to be used as intended.” Incredulously, Allard asks the Treasury Official to contact her about what she needs to do next.

The kind soul at the Treasury Department who sought only to coordinate a phone call and instead found themselves hit with Allard’s wild email in which she asserted her belief that fraud, waste, abuse, dishonesty, and a lack of transparency by the Municipality of Anchorage were occurring simply responded:

I guess we will have to wait and see if Allard changes her opinion on using CRF since the ‘Bronsonville’ mass shelter is based on the Reno model, which is called “The Nevada Cares Campus,” which was paid for in part, using CRF!

Isn’t Bronson proposing using the same funds for ‘Bronsonville?’ It sure sounds like Bronson can’t count on the Eagle River Assemblywoman if a vote on the matter ever comes before the Anchorage Assembly.

Eagle River probably needs better representation because for all the cries of fraud and waste — all I’m seeing is a poor representation for Eagle River’s constituents — at least for the ones privileged enough to be acknowledged as such. Anyway, Allard seems very much against using CARES Act funds to pay for buildings intended to help the homeless.

As for the audit of Cares Act spending the Assemblywoman has mentioned on social media, ostensibly excited at the prospect of finding some shred of evidence that the Municipality has screwed up, I wouldn’t think much of it. Every state in the country is undergoing a desk audit.